Posted by Nick Skog on Saturday, July 7, 2012 Under: Interviews


The Storms of Doom: Interview With Subterranean Disposition ...
For this time I let myself use words of official biography of  Subterranean Disposition: “It is a one man Melodic doom/death metal/ ambient recording project hailing from Melbourne, Australia. It’s progenitor, Terry Vainoras, is a musician’s musician of the Australian metal scene, with a decade and a half long career of recording and performing with many groups, in almost as many different sub-genres of metal. From the grindcore of Damaged, to the Swedish melodic death stylings of Earth and on through the metallic hardcore of Order of Chaos, the black metal of Hellspawn and also the doom styles of Cryptal Darkness, The Eternal and Insomnius dei, Terry has covered much musical ground and Subterranean Disposition is the melting pot of creativity where the former and recent influences can meet and interplay”. With six compositions with the average time of around ten minutes each, ‘Subterranean Disposition’ soon will be released by Hypnotic Dirge. Here’s an interview with Terry Vainoras.


Hail Terry! How are you man? I see that you’re closing to first full-length of your solo-project Subterranean Disposition, but first of all where and when did you start as a musician?

Hail Aleks ! I am doing really well. I started out in music like many other teenagers across the globe by playing Thrash covers in my first band in high school, Twenty years ago now!Hah… It was pretty long ago!

What were conditions of Subterranean Disposition birth? What kind of conception – both musical and ideological – did you want to impress through this project?

The birth of Subterranean actually came from the ashes of another project I was Involved in, Insomnius Dei. We released one album “ illusions of silence “ on Firebox Records. The Music was all written by Mark Kelson (The Eternal) and I took care or lyrics and bass. After we finished the album I was really excited, I was inspired to continue this style of music, long open songs with heavy and ambient parts. I soon began writing demos in the same style with my own writing personality within it. In time I had a full album with lyrics without any of Marks input and when I realized we were not going to be doing music together anymore I made the decision to take these solo compositions and move forward and record them properly. I am glad I did!

So do you have a kind of musical / doom community in Australia? I know few great bands from your region but can’t say that it’s too much. Which underground genre is more popular in Australia now?

There is not a unified doom scene in Australia in any sense, there is just not enough people here for that I think, although we do have some great doom exports such as Mournful Congregation, Inverloch, Okera etc… Thrash, Death Metal and Grindcore are still very popular down here!! Aussies love drinking and fast metal!!

It sounds like Subterranean Disposition is almost DIY project, though you release the album via Hypnotic Dirge. Do you feel yourself more comfortable when you do all stuff for project by yourself? Don’t you want to play live these songs?

The experience of recording it all by myself was a very liberating one after years of being part of groups for sure and I learnt a lot in the process. It was a necessary thing to do at the time. However I do want to play live and currently I am putting together a group to interpret the songs live in order to promote the album both here and overseas.

It was bloody interesting to know that (as official site of project says) your music can be compared also with Bohren und der Club of Gore, amazing funeral jazz band. I’ve just re-listened some of their albums a week ago… I’ve noticed frail jazz-influences in your music but how did you come to idea of using such elements in death doom?

The comparison to Bohren came about because of the use of Saxophone in an ambient part of the track “ Most subtle of storms “. There are traces of jazz – like chords in the guitars of some of the other songs also, but I think the sax part stands out the most in this vein. At the time I had wanted something more interesting than a guitar solo over that part of the song. I asked my friend D'arcy Molan to see if he could come up with a sax part in a style like that of Bohren as a tip of the hat to their mighty artistry and he came back with what is on the album, a perfect fit in my opinion that lifts the whole song and transports the passage back into the heavy riffs at the end.

And what’s about other influences besides jazz? Do you see as a compositor some unusual elements in your music? I could miss something because true to say I’ve listened album only thrice (and have a lot time to do it more) but I guess that this work has it’s prog vibe, it’s not a standard death doom thing though I can’t tell if there’re really something from other bands.

I can understand the prog vibe you are describing although I do not listen too much that can be labeled “Prog”. I cannot really say what other influences are present other than my previous songwriting evolving into being tried out in the format of doom. I just wanted to use the style and have a ten minute song feel like a three minute song, because it keeps your attention the whole time.

Who is a girl who sings few verses in “Prolong This Agony”? Sounds good, and I must say that a combination of such unusual for doom death relaxing yet dark elements and dynamic attacks with growl and heavy distorted guitars remind me a bit a long gone avant-garde band Lux Occulta. You have very effective methods of work.

The Female vocals on “Prolong this Agony” and also on “ Wailing my Keen “ were performed by Phoebe Pinnock, a good friend who fronts a Hard rock/Metal band here in Australia called “Heaven The Axe“. The Lyrics in “Prolong “ were written from a female perspective over the acoustic riffing and from a male perspective in the later heavier parts, in trying to show both sides to a relationship breakdown. I think Phoebe did an amazing job interpreting the words melodically in a style that’s different from the music she writes normally, it kind of reminds me of a doomy Kate Bush rather than the normal gothic or symphonic female vocal that’s known in Doom, which is what I thought would work and make the song stand out.I have not heard of Lux Occulta, but thank you for the comparison, I will be searching them out!

Yes, that’s right that I mean – her singing doesn’t remind standard doom stuff, I’d rather say her manner is closer to some trip-hop style. Terry, what do you listen besides doom music? What are most expected releases of 2012 for you?

I listen to a whole lot of different music besides metal… Jazz, Funk, Golden era Hip Hop, Country, Noise, Grunge, 70’s rock, Hardcore, Soundtrack scores… the list goes on !Right now out of anything I am really looking forward to the new Neurosis album this year. 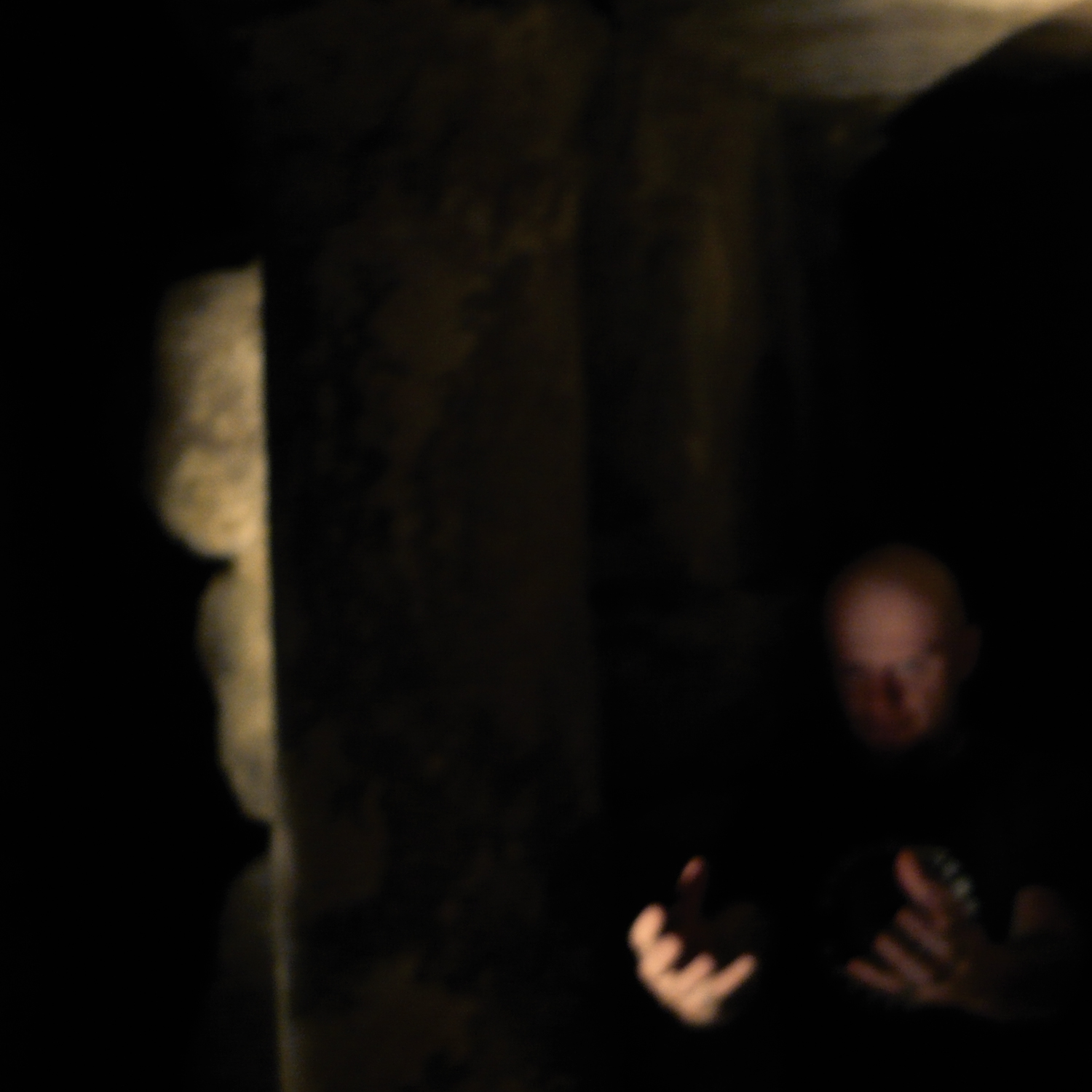 Is it was prime goal of you – to write non-trivial and… well… sophisticated music? It’s obvious that you’re not newcomer in dark world of underground so tell us please about your motivation?

For me with any of the music I do the main motivation is always to follow through and help guide the initial idea and see where it takes us both. How the music turns out also can be a reflection on what I have listened to and learned from years and years of being in bands and being a passionate fan of all music!. Like many other things in life, I love things than make me think, have many layers or levels to explore and most important it strikes a chord inside.In the Context of Subterranean It feels right to express the music and words in this way.

Agreed! How did you record the album? Did you meet any technical difficulties working with sound?

Initially I recorded all the songs as demo’s at my home studio, then I took all the pieces to Toyland studios here in Melbourne with Adam Calaitzis, to basically re-record it all with better sounds. I have been recording music at Toyland with Adam for well over ten years now, he has an amazing ear for detail and works very quickly too. I came very prepared to perform all the parts of each song, we captured the right sounds referencing the demo’s and all in all the experience was great.

I’m not a professional in such things, but how much time do you usually spend with all of your amps searching for needful vibes and tunes? Do you have some favorite amps for example?

To be honest, I have had the same amp set up for a long time and know so well what sounds I can pull out of it that I would be lost trying new gear out!I have an old Marshall head with a Mesa Boogie cabinet. A lot of the vibe for SD also comes from different techniques on the guitar, ie string bending, picking and muting and so forth.

What kind of reaction you expected from listeners?

I am expecting the unexpected ! No two people will have the same opinion about the album so I am just looking forward to any feedback, either positive or not. I could only grow from what others can offer.

What modern doom-trends you like and dislike more than others?

I like how much variety there is within the Doom umbrella of styles – Traditional, Doom/Death, Funeral, sludge, drone, stoner… you name it. What draws me in is creative people playing from their hearts - they are the ones who stand out and say something extra and right now I am hearing a lot of that within Doom.

Do you already have plans for next release of Subterranean Disposition? Would you like to use sax or some new instruments or elements again?

The Songs for a second SD album have actually been Demo’d and finished  with the normal bass/guitar/ drums/vocals at this point and yes, there is some room in there for experimentation with other instruments I believe. So far some minimal piano has been added and also an instrument called the ondes martinot which is a weird hybrid of a piano with theremin! As for sax and other things, time will tell. It will be fun to see what can work with the songs.

Thank you Terry for this interview, I hope that Subterranean Disposition will easily find it’s listeners with your help and help from Hypnotic Dirge. Good luck man!

Thank you for the great questions Aleks ! Hails from Australia !