Posted by Nick Skog on Thursday, July 27, 2017 Under: English
From: Ave Noctum
Published: July 24, 2017
Original Link
At last some proper grown up black metal from the UK. No clown-shoes and corpse paint in evidence here and it’s a welcome relief as I seem to have been hearing too much of that sort of stuff lately. It’s like the old teenagers in peril stalk and slash film, you can enjoy it on one level but you hunger for something a bit more adult and mature. There’s just too much in the UK as far as this sort of music is concerned and here it’s just taken a record label from Saskatoon Canada to discover this from a limited 20 copies cassette edition and release it to the wider world from right under our noses. To be 100% accurate you may want to put a ‘post’ tag alongside the black metal banner here but it is thoroughly authentic, claustrophobic and even downright scary stuff. This has an urban and stifling feel much like London itself where the mysterious one man band hails from.
After a few lone guitar chords 1st track ‘Shame’ literally barrels in all fists flaying. The drums make a marvellous clattering racket, guitars strum hell for leather, there are some neat underlying and despondent bass tones and the vocals are caustic and downright vicious. This completely rips the head clean off and is phenomenally weighty and thick as far as the heft of the mix is concerned. I am reminded of Altar Of Plagues quite heavily here which is no bad thing, it has that sort of power and substance about it and is far from cautious when it comes to adding experimental ideas away from the main frame. Indeed the crush is taken out of things by some melodic and barren instrumentation here, post-rock through to post punk perhaps as there is a bit of a Joy Division / Warsaw vibe about the slow drum beat and maudlin guitar melody. Of course it all ploughs back in and the wonderful contusion of sound flattens again but it is made all the more powerful for this atmospheric break. ‘Pariah’ maintains the velocity and harshness that a young Anaal Nathrakh would be proud of and it certainly feeds off the listener with a fury and no mercy spared. The sense of melody is not forgotten though and it’s delivered in a coruscating whirring blur. ‘Void’ allows some calm as we enter it and are mesmerized by more of those bleak instrumental tones. It does build with power from jarring riffs. There are some spoken word parts that come in towards conclusion credited to Charles Booth in the CD booklet, it leaves me feeling like I have walked down the smog cluttered streets of our aged city and stepped right back in time. ‘Madness’ descends and we are back in modern chaos, 3 minutes of pummelling, strident clamouring riffs and harsh venomous vocal barks. ‘Broken’ seems to sit midway between the two tempers of rabid and atmospheric and draws you right in whilst spitting venom at you but then things go rather odd..
I’m simply not that sure about the last couple of tracks and wonder if the album would have been best left as an EP without them. As it stands it would have made a massive impact but these numbers kind of draw away from that. Not to say I don’t like them but I can’t help wondering if they are here to bring up the running time. Obviously not though, as the first is the title track and it takes a fair pause after a definite concluding point in the last number for it to start. I guess it is best described as a long and hypnotic piece of DSBM, bleak and adrift on the wind, the vocals still snarling but fainter and with a real feel of desolation. I get the feeling that maybe after the mania of what has come before we could even be being told a story and the narrator has slumped into cold mental torture and maybe even find themselves incarcerated. All good, music should feed the imagination and this is certainly doing so. Perhaps the final long instrumental ‘Pulse’ is a vision of the future a dystopian look into things as it’s a futuristic piece of synth work. All I really need to say is it’s very Blade-Runner.
I am very intrigued about all this and who is behind it, perhaps it is someone I know through other bands and I wouldn’t be too surprised but that might even ruin the mystery behind it all. One thing is for certain it’s a very accomplished piece of work and well worth your time and attention.
Rating: 8/10
Reviewed by: Pete Woods 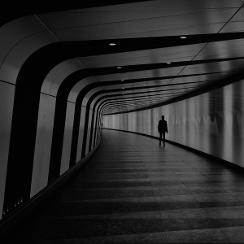