Posted by Nick Skog on Thursday, May 23, 2019 Under: English
From: Wonderbox Metal
Published: May 21, 2019
Original Link
Kval are a black metal band from Finland and this is their second album.
I’ve been greatly anticipating the next Kval release, as the band’s 2017 self titled debut album was quite the underground find. The debut seemed to be a solo affair, whereas this new one seems to have added a guitarist.
Laho is the sound of an artist recognising what he did so well in the past, and expanding upon it for his follow up album. The core of the music here is still the same variety of atmospheric black metal, as cold as night and dark as sin, but this has been added to by a few different elements.
There’s a greater warmth to the music, and overall it has more colours and textures in its compositions. In fact, the difference in album art is a good indicator in some ways. The first was murkier, duller, whereas the new one has a wider palette and clearer colour focus.
There is also an addition of folk influences and instruments dotted around the songs. Although I’m not always a huge fan of this sort of thing, as it’s usually not incorporated well, on Laho it’s tastefully done, and enhances the main aspects of the music in an effective way.
The ambient synth parts of the debut have been largely replaced with the above elements, (although not completely). Also, there’s an increased reliance on post-black metal-esque melodies, as well as a shoegaze influence that’s more overt than previously, if it was there at all. These are used to help create atmosphere in a different way across parts of the album, once again widening what Kval are capable of.
Kval’s second album boasts a richer musical framework within which it casts its blackened spells. Some of the darkness has been replaced by shades of light and colour, and this is no bad thing as it turns out. I like that it’s similar enough to what came before to be obviously the same project, but that the band’s music has progressed and developed, pushing itself to be ever-better. All of this is done without losing any of the high quality levels that the debut album exhibited. In fact, I’d say that the changes wrought on this new release find Kval in better form than ever.
This is engrossing, utterly absorbing atmospheric black metal that has moved beyond the confines of its original birthing grounds, and now operates in increasingly rarefied territories. Laho fulfills all of the promise shown previously by Kval, and produces an album that is emotive and captivating. 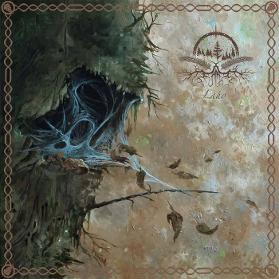