Posted by Nick Skog on Thursday, July 27, 2017 Under: English
From: Ave Noctum
Published: July 23, 2017
Original Link
The sleeve notes usefully tell us that Kval’s debut album “includes slow, agonising material from 2013 to 2016”. This album was originally conceived in 2015 but under the mantle of Khaossos. Life, emptiness and chaos are what drives this one man atmospheric black metal project from Finland whose musical preferences and influences include Burzum and Forgotten Woods.
Eerie beginnings spawn a heightening level of tension. The musical images are of a cold and misty place. This leads us unsurprising into the slow and lonely world of “Sokeus” (Blindness). We are in the woods depicted on the album’s sleeve. Progress is deliberate and majestic. It’s also sinister and nasty. The distant-sounding growled cries fade out and the tempo slows for reflection before cranking up, and once again depicting a world where hostile nature is all around. The electrifying horror that we would associate with Burzum is here. “Harhainen” (Mistaken) continues with a funereal and depressive tone. Stubbornly, it trudges for its nine minute duration through the melancholic gloom without transformation but at least but with power. “Kaiku Tyhjyydestä” means “Echo of Emptiness”. It is a short but sombre and monotonous journey. The pitch changes as Kval’s oldest track “Polkuni Vailla Suuntaa” (I Walk Without Direction) brings back the black metal firepower. Again the riff is monotonous. The track progresses steadily and ferociously. “Kuolonkuu” (Death of the Moon) has overbearing power, and all the bleakness you would associate with classic Burzum. It negates all life forms but through its attritional overbearing blackness. A quiet and menacing guitar line enters the scene momentarily before returning to uncompromising frostiness. Fittingly, the album ends with a bleak and colourless instrumental, “Toisella Puolen” (On The Other Side).
This album is cold, alienating and merciless in its delivery, making it impersonal and repetitious. Yet it has impressive power and has all the attributes of a proper black metal album.
Rating: 7.5/10
Reviewed by: Andrew Doherty 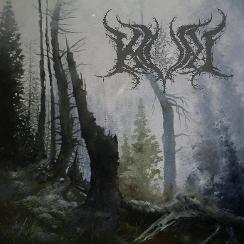