Posted by Nick Skog on Thursday, February 4, 2021 Under: English
From: Ave Noctum
Published: February 1, 2021
Original Link
The old-world charm of Victoria, British Columbia, isn’t the sort of place I’d associate with “black metal surging with atmosphere and anguish, melancholy and rage” but this is what we have.
With an eleven-minute track at each end of this 55-minute work, this plainly isn’t your old school “let’s make a statement, fill the air with evil and be gone” black metal. Epic and atmospheric is what it is. Fires burn on “A Hollow Visage”. There’s a continuous wall of sound. The vocals crackles to match the burning fire as black metal vocals should. I have visions of bleak landscapes. There is power but isolation. Liminal Shroud present a big vision, evoking natural forces and creating atmospheres not dissimilar to my blackgaze compatriots Fen. Such expanse is developed further in the gloomier “Tainted Soil”. The heaviness weighs us down. The piece flows but “pestilence, soil and disease” are reflected in the repressed darkness.
The themes of this album are “futility, passage, and individual and metaphysical transformation”. I got this when listening to “Through the False Narrows”. As a listener, it’s like being witness to a stormy, desolate world in motion. Tracks like “To Forget” evoke melancholy as the burning fires bring out pictures of regret over time: “What trodden earth has been lost in the relentlessness of time”. Amid the stormy forces, the music has a trance like quality. Both “The Grotto” and “Erupting Light” take us down the same path, and absorbing as they are, I couldn’t distinguish much between them. “Through aeons of nothingness I hear the earthen echo” sums up the bleak “Sentinel”. The atmosphere is cranked up for the final piece “Lucidity”. The energy is back and there’s an epic urgency about it. There is power in the delivery and the sentiment: “we are but whispers to the wind”. “Lucidity” ebbs and flows in intensity and mood, driving atmospheres which reflect the forces of nature, power, a sense of loss, disillusion and melancholy and doing so with epic structures.
Rather than surging as claimed, I felt that the middle section of this album became becalmed. It seemed that the band knew the atmosphere they wanted to create but the “anguish, melancholy and rage” became blurred into one mass. “Through the False Narrows” is loyal to its themes, and in particular the two big pieces on the album demonstrated how big themes deserves grand stories and epic structures. Liminal Shroud invoke and intermingle nature and human frailty. Musically they do this very well, and I’m sure they can develop in the future the intense theatricality which is here in part. “Through the False Narrows” is in any case absorbing, and at times its passages are inspiring.
Rating:7/10
Reviewed by: Andrew Doherty 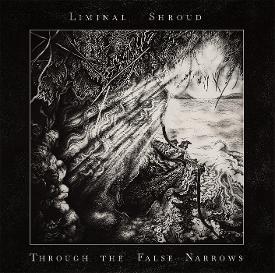