Posted by Nick Skog on Monday, August 5, 2019 Under: English
From: Ave Noctum Webzine
Published: August 2, 2019
Original Link
irst of all, for clarification this is Sertraline from the cold climes of Buffalo, USA, not the north of England one. Second, my enquiries took me to an anti-depressant of the same name. This Sertraline, whose second EP this is and whose members are the fallout of Where She Wept, are responsible for “aurally decadent post black metal”.
After an initial section where dark clouds build up and the sound is of crashing waves, a classic post metal ring strikes up. It is at first delicate and enticing. The scene expands and the atmosphere, enhanced by deep growls, becomes denser and heavier. After a quiet spell, “Hounds of Avarice” reaches a frenzied end. It’s all good, but it’s all very familiar. “The Knowledge of Trees” then starts with purpose. The drummer sets out a mean beat, as a controlled intensity builds up. Unfortunately whilst there’s nothing wrong with what followed, the next few minutes follow a less intense path and for me got lost in a bit of a fog. So to track number 3 “Entwined”, which once more features the component parts of a growly post metal number but unlike the first section of “Hounds of Avarice” did not rise from the ashes. As if trying to tick every box, there is a spoken passage. Nice drumming though, and I appreciated the deft instrumentals which create the impression of mists rising. The atmosphere builds up carefully, and if bringing this short ep to a rousing end, Sertraline do build an impressive expanse of sounds to close it.
Stylistically, there was much here that I’d heard before and I’m not sure that Sertraline would have taken me to new territories or heights if there’d been more than the 19 minutes that constitutes this ep. Here and there “From Both Our Hands” is impressive. For the most part it follows a familiar but uninspiring pattern. Instrumentally it is good, but in spite of the growls and fire, I didn’t feel flames or tension. The fire was too much under control, and for the most part I found myself at a safe distance from the recorded output.
Rating: 6/10
Reviewed by: Andrew Doherty 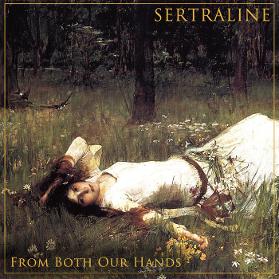