Posted by Nick Skog on Friday, June 17, 2022 Under: English
From: No Clean Singing
Published: June 5, 2022
Original Link
The next two songs, both of which are longer than average, are from the debut album (a concept album) of another Russian band, and this is my first exposure to their music — which turns out to be a fascinating experimental amalgam of modern and traditional ingredients, both within and far outside the realms of black metal.
Like some of the other preceding songs in today’s collection, “Aspiration a l’Absolu” becomes a wild, racing, sky-soaring assault, both frighteningly turbulent and brazenly magnificent. The song is layered with many instrumental accents, including symphonic synths, and includes fiery filaments of melody that swirl within the hurricane-strength storming, a surprising duet of piano and accordion that somehow doesn’t seem out of place, and a vivid violin performance that comes in above a spine-shaking jackhammer-fest. The vocals turn out to be just as tremendously varied as the far-flung pageantry of the music.
“Sleepingstatic” is perhaps less startling than that first song, but only because, by the time you reach it, you’ll have already experienced just how remarkably multi-faceted and surprising the band’s music is. Yet it goes places that “Aspiration a l’Absolu” didn’t go, and includes additional instrumental ingredients (including mesmerizing saxophone solos and burbling bass-like arpeggios to go along with the accordion and other elements that are harder to place). It’s equally worth the time to become immersed in it and swept away by its exhilarating extravagance. (It doesn’t skimp on the neck trauma either.)
The album’s name is Beyond Ratio. It’s coming out on June 17th via Hypnotic Dirge Records. 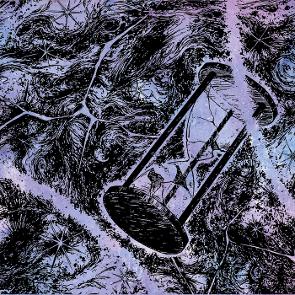