Posted by Nick Skog on Sunday, March 31, 2019 Under: English
From: Metal Temple
Published: March 26, 2019
Original Link
Formed in 2012 in North-East Italy, THE HAUNTING GREEN’s music is a combination of aggressive Extreme Metal and Ambient Drone and Dark Electronic music. “Natural Extinctions” is the band’s debut full-length, and features themes of the inability of human beings to preserve their innocence and the bond with nature during their existence. The album contains seven tracks with a total running length of just under 50 minutes.
“Lazarus Taxon” opens the album, with a darkness that just creeps in slowly. Some light percussion joins in, as does clean guitar notes. The hard hitting guitar notes thud against the earth as if a mastodon came back to life and is walking the plains towards the frozen hills. At about the half-way mark, it takes on a Black Metal pattern, with blast beat drumming and the ever-presence of guitars. “Natural Extinctions” opens with a murky and doomy landscape. The vocals are extremely angry and the chord progressions of the main riff not easily accessible. I like the “surprise” element you get out of this song. The sound drops off about half way through, to solemn clean guitar notes, as if the world around you has fallen and you are all that is left. When it picks back up, it’s eerie to completion.
“The Void Above” opens with an eerie melody, and some melancholy elements. When the vocals come in the Doom is dialed up a few notches. The riff slumbers in the low end of the spectrum and the entirety of the song is dark and hateful, growing progressively gloomier towards the end. “Litha” opens with soft little bells ringing, and a growing feeling that something looms around the corner in the dark. It begins to pick up a bit, with guitar and drum strikes when you least expect them. A melody starts to bubble underneath, with a charming sound. It’s still a hazy shade of grey but I appreciate where the song is going. More of those strikes appear towards the end, and it’s only then that I realize there were no vocals…it’s quite hypnotic.
“Where Nothing Grows” is a near ten-minute beast. It opens quietly, with pretty atmospheric tones. It sounds like Post-Rock here, a genre that I love. But the darkness seeps in pretty quickly, with a heavy guitar riff and light percussion. The vocals drag it down into muddy waters and take you with it. But those subdued pretty moments make their way back into the mix. It’s an odd combination, but it works. A haunting piano passage rears its head around the seven minute mark, capping a brilliant song overall. “Rites of Passage” opens with another pretty melody as the guitars echo off the mountainside, creating this weird dissonance in your ears, partially distracting you from the heavy thud of bass guitar and the percussion. The three dance in union, each doing their own thing, but creating a synergy that is hard to describe. The vocals come in and cover everything in a sickened darkness, from which there is no escape.
“Luminous Lifeforms” opens with another Post-Rock feeling, with Doomy element soon to follow. The charming but doleful melody then returns with heavy guitars and bass together. As it moves to completion, it’s like watching the final days of your life play out in front of you. What makes this album so special, besides its highly personal approach, is the manner in which they blend genres that weren’t made to be blended, at least not as easily as they do here. It’s doomy at its core, but it’s so much more than that. They blend in melody that is then crushed by the weight of the Doom but still manages life. Another unique feature was that the vocals were there to support the music, not take over it. That’s another hard things for bands with vocalists to do. What a unique and very personal ride this was from this Italian duo!
Rating: 10/10
Reviewed by: Dave Campbell 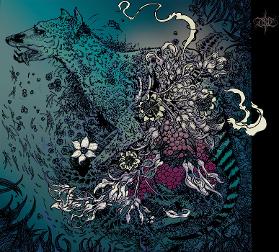