Posted by Nick Skog on Wednesday, May 31, 2017 Under: English
From: Doom-metal.com
Published: May 31, 2017
Original Link
OK - well, this is...sizeable. A double CD package: four tracks occupying well over an hour and a half of music, all wrapped in designs filled with cryptic symbology and iconography, delving into quasi-religious mythological archetypes, and with a whacking great booklet included. In fact, 'sizeable' doesn't really do it justice - let's go with 'bloody enormous', instead.
VdMT, never the most predictable of bands - despite the constancy of their line-up - have steered a somewhat unconvential path through their release history, backtracking somewhat since the original EP and 2013 debut with older and rougher live footage and then producing a surprisingly effective stop-gap split release (2016 split with Nethermost). Not that that leapfrog approach has done any harm, given that it's kept the releases coming, both supplying some background context for the fans and showing some demonstrable improvements in the studio.
So, what does 'Palimpsests' do to capitalise on that? The answer is: several things, starting with the conceptualisation. A palimpsest is a reused and overwritten scroll, something reflected both in the packaging design and the cyclic retelling of collective myths. Despite that, the tracks themselves are separate entities within that framework rather than structurally bound to each other, as indicated by the choice of different scripts for each title (Sanskrit, Greek, Roman and Glagolitic). A wise decision: with each run time weighing in between 19 and 30 minutes, it leaves scope for diversity in the compositions, and freedom for the listener to digest at their preferred rate.
Nonetheless, each of them starts out as a pretty big canvas to fill - particularly given VdMT's past form for delivering significant levels of complexity in much shorter packages. Any trepidation as to whether that might result in an excessively busy approach is swiftly assuaged, however. Though every song winds through a number of movements, and takes in several different genre styles along the way, they do so in a pleasingly accessible and encompassing way. I would certainly consider it a significant foray into Prog-Doom - and in some places not really Doom at all - rather than anchored in Death/Doom roots, although those still make plenty of appearances. Opening track 'Mātariśvan' (a Bronze Age Prometheus character), for example, sweeps from Ambient to Post-Rock to melodic Death/Doom to Punk to atmospheric Metal, making it a somewhat fruitless task to try and really categorise it. In similar vein, I could pick out swathes of different bands to reference, with vocal and/or instrumental moments that call to mind such varied names as Skepticism, Pink Floyd, King Crimson, Killing Joke, Mourning Beloveth, Green Carnation, Suffer Yourself, and more...all true, yet not especially helpful, other than to highlight that this really does massively transcend boundaries.
Fortunately, it is easier - and somewhat more informative - to take a look at the technical side. Compositionally, it's well-done - the eclectic elements merge and transition effectively, giving each track the feeling of a different yet intriguing journey. Instrumentally and vocally, it's even better: the breadth of soundscape being explored is quite astonishing for a quartet with just a few guests helping out, and a minimal enhancement of keys and ambient effects. That said, once again I'd have to single out Andrey's expressive vocal repertoire (particularly some excellent clean sections) and the roving heft of Alex's bass as standing out even amongst the quality on offer. Whether dancing an ethereal light fantastic, sliding into Eastern-tinged grooves, or plunging into dark and heavy depths, the performance remains exceptional, presented with beautiful clarity by the mixing and mastering of Mournful Congregation's Damon Good.
It's certainly an ambitious work, covering a lot of ground, and taking in a lot of intelligently-presented material. The remaining tracks - judging by the somewhat deliberately-occulted (by their overwritten presentation) lyrics - would seem to cover the civic duty of sacrifice for redemption ('Pharmakos'), the cycle of death and rebirth ('Fuimus', Latin for "we were") and the deluge ('Noe', being an original version of Noah). And, in my opinion, each of them manages the elegant and not insignificant trick of not only telling the story but creating and sustaining a separate musical atmosphere that fits the mood of it.
In all honesty, I'm quite surprised it's only taken four years to come up with 'Palimpsests'. Whether you like the results or not, it's still a pretty bold and astonishing step up that maintains VdMT's highly-recognisable individuality, yet delivers something completely new and unexpectedly massive. Personally, I love the way it combines elements of many of my favourite bands (see above) into something distinct, unique and wholly absorbing. Will it appeal to everyone? I somehow doubt that. But it is, nonetheless, an outstanding piece of work, on every level.
Rating: 10/10
Reviewed by: Mike Liassides 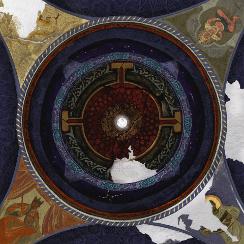