Posted by Nick Skog on Saturday, September 28, 2019 Under: English
From: Metal Temple
Published: September 25, 2019
Original Link
WILLS DISSOLVE was formed in late 2015 in Houston, Texas by guitarist/vocalists Nick Block and Andrew Caruana, brought together by their love of Progressive, Doom, and Extreme metal. They were joined shortly by Black/Death metal drummer Branson Heinz and bassist Shaun Weller a veteran of the Punk/Metal scene in his home state of Michigan. “The Heavens are Not on Fire” is a reissue from 2018, and contains five lengthy tracks.
The title track leads us off, and it’s the longest, at over twelve minutes in length. Ambient keys usher in the entrance. It’s quite pretty, and melancholy in nature. Harmonic guitars enter and then the drums create a marching cadence. When the vocals drop, they are guttural utterances and a blackness covers everything. As sudden as it starts, an interlude of pretty clean guitars wipes out the madness with its tones. Clean vocals come into play and it takes on a Folky element at this point. But the chaos returns through the end of the song, ending on a note of beauty. “So do not Mistake these Ashes” opens with some clean guitar tones and a steady, low, distorted riff. The vocals are absolutely vile in nature. The ambient passage with clean vocals is a nice contrast to the heaviness of the song.
“For Signs from on High” opens with a slow, Doomy cadence, and then some blast beat drumming. There is a back and forth between harsh and clean vocals, and the song has an ominous feeling to it, like there are things alive in the dark too filthy to conjure an image of. The ambient passage is again nicely done, as well as the harmonized lead guitars. “On this Cold November Night” opens with sad clean guitars and vocals, imagining what you would have on a cold November night. Winter draws near, and all you have to look forward to are colder and darker days. It waxes and wanes, drawing power from the alternating passages.
“11-13-1833” warranted a Google search. It was the date of a major meteor shower…72,000 in an hour. This doleful instrumental is a stark contrast with what would have been a major historical event in science. Overall, I really appreciated the diversity of sounds presented on the album, though it was hard to pigeon-hole the genre. Sometimes, the weight of the crushing Doom was enough to nearly kill you, while the ambient and melodic passages were quite beautiful. The transitions to and fro made sense, and the entire album came together with this undying synergy and uniqueness. Overall, an undeniable winner.
Rating: 8/10
Reviewed by: Dave Campbell 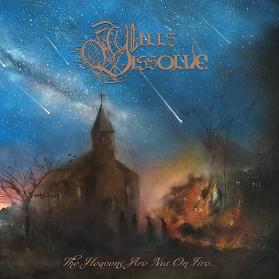