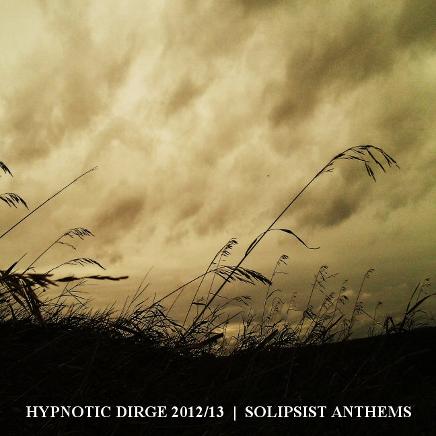 DOWNLOAD AUDIO: MEDIAFIRE  |  RAPIDSHARE | BANDCAMPDOWNLOAD ALBUM ART, VISUALS: MEDIAFIRE | RAPIDSHARESTREAM VIDEOS: YOUTUBENOTE: VIDEOS ARE AVAILABLE TO DOWNLOAD BY PUTTING THE YOUTUBE URL ON WWW.KEEPVID.COM VIDEOS ARE NOT DIRECTLY INCLUDED IN THE DOWNLOAD LINK BECAUSE OF THE LARGE FILE SIZE.

Life is a journey filled with tragedy, monotony, and the continued lowering of expectations. As you reach early adulthood, the optimism of childhood quickly fades as you realize you live in a world filled with selfish, corrupt, manipulative people and modes of societal organizations, as well as a world furthering down the slope of idiocy and ignorance. Hypnotic Dirge is meant to convey this reality and tell the story of life as it really exists.

Four years have now passed since the birth of my daughter Hypnotic Dirge. Not that I should attribute any particular sex to this record label, but if it a girl than it is certainly a cruel and doooooomy one at that, and only four years old as well! Imagine how cold she will become in 20 or 30 years time cultivated in this environment of failure, lowered expectations, and phantasmagoria.

...but enough with the shitty metaphors. This year's edition entitled 'Solipsist Anthems' might just be the most exciting free Hypnotic Dirge compilation album released so far in my mind. The main audio portion of this compilation features 14 tracks and almost two hours of music from all of the currently active bands and projects on the label as well as some guests courtesy of the great Solitude Productions to make this a truly monumental and collaborative effort. This year's compilation is definitely more doom-centric than past editions but that reflects the overall focus taken on by Hypnotic Dirge in the past few months. However, throughout the compilation you will also hear some black metal, post-rock, ambient, and experimental sounds from a pretty diverse group of artists, musicians, and comrades that I am truly honoured to collaborate with. In fact, collaboration was a particular focus this year with the album cover and title voted on by all of the artists on this compilation. After all, it is their work and effort which permeates this album, not mine and that should be reflected and emphasized as much as possible.

Furthermore, collaboration was also a theme on the bonus tracks featured on this album with Subterranean Disposition doing an experimental cover version of netra's track 'a kill for a hug' (renamed for this cover version as 'a hug for a kill') as well as my own minimal keyboard work on stroszek's track 'where it all went wrong.' In fact, the bonus songs on this compilation features an additional 34 minutes of music not really fit for the main tracklist, not that they are of lesser quality, but simply that they are more or less deviations in theme, sound, and focus.

As with the past compilation albums, there are also four videos included from Subterranean Disposition, Lycanthia, Nethermost, and Old Forgotten Lands to include a visual accompaniment for the music. These videos have also been uploaded to the Hypnotic Dirge youtube channel in case you did not download the "bonus folder" of the compilation due to the larger file size that is an inevitability with videos. Finally, further visual accompaniment is included with the addition of photographs taken from a few people either on, or connected to the label.

This compilation album is dedicated to Jaron Good, also known as Vultyrous in Funeral Fornication and Archspire who suffered a major stroke completely randomly a few months ago. Fortunately, he is expected to eventually make a full recovery and plans to keep writing music and touring. All the best to him!

A word about the title: Solipsism refers to a psychological state in which a person feels that the world is not external to his or her mind. Periods of extended isolation may predispose people to this condition.