The collective impending fall of the human race.

Mavradoxa is an atmospheric black metal band rooted in the Laurentian region of upstate New York. Formed in early 2016, the band wasted no time at all releasing their first full-length album Sojourners in September 2016 as a two-piece with Zach Smith on Guitars, Bass, and Vocals and Monica Finger on Drums.
Originally self-released, Sojourners was soon thereafter re-released by Nebular Winter Productions in Greece on CD and Cassette in November 2016.

Mavradoxa quickly returned to Rotten Metal Recording Studio that winter to record their follow-up album "Lethean Lament" for release in June 2017 on Hypnotic Dirge Records. The music on Lethean Lament is expansive, atmospheric, and melancholic. Music made for dreary and rain-soaked days during solitary walks, or in any moment of introspection. Long progressive songs that flow with purpose where the atmosphere dictates and paints vivid stories in its movement and direction. 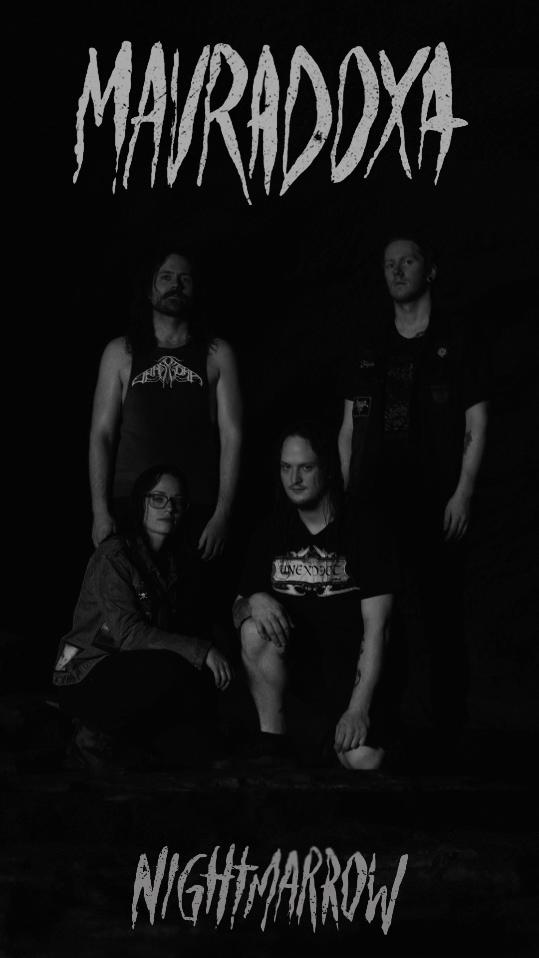 After hunkering down to record throughout late 2018, Mavradoxa is now preparing to return with their third full-length album Nightmarrow, following 2016's Sojourners and 2017's Lethean Lament. Mavradoxa's third album, although related to the tonal atmosphere and character of previous albums sees the band developing and intensifying their song-writing ability crafting simultaneously cohesive yet unpredictable songs with a progressive hue that is still rooted in Atmospheric Black Metal.

Nightmarrow is a meditation on the isolation and hopelessness of our age (particularly in the realm of the urban), and the consequences of technology and voracious consumption of resources. The nightmarrow, the specters here are the distillation of our negative qualities: the interminable urge to consume, to control, and the chaos that results, this malevolent part of our human nature lurking in all the woe and decay we've created.

The spirit of the album is rooted in the cycle of bloom and decay. It juxtaposes the purity of nature and the encroaching venom of urbanity. It contemplates the futility of technological advancement. It questions what would become of the planet if we continue down our current path into annihilation, if it would be left a hollow shell, or if new life could ever bloom in the soil of our remains.

Nightmarrrow was Engineered by Nicholas Alan at Subterranean Studios, Mixed by Stephen Parker (Pillorian, Maestus) and Mastered by Justin Weis at Trakworx Recording.

The album artwork for Nightmarrow was concocted by Dylan Garrett Smith, an artist whose work similarly conjures humanity's relationship and growing distance with the natural world.

Nightmarrow will be released on Hypnotic Dirge Records
on May 2, 2019.